Aphid vector captures are up again this week, but the regional PVY Vector Risk is less than half that of last year.  While some sites this week are close to last year's numbers, far more sites had high numbers at this point last year than this year.  However, at this time last year, the vector population peaked and captures began to decline through August. This year's population seems to still be growing and our PVY Risk may continue to increase.  The graph below on the right shows the average number of PVY vector aphids caught across the region at this time last year, the graph on the left shows where those populations are this week.  Note the Y-axis range is very different, the 2021 populations were 2-3 times those of this year.  But in 2021, because of the hot, dry year, most aphid movement from small grains had already occurred by this time.  This year, many crops are behind where they were last year, there has been significantly greater moisture and conditions for continued aphid population growth through August are much better than in 2021.

The data below shows that for the first time this year, the number of vector species captured outnumbered the non-vectors. While many of these were cereal aphids (Bird Cherry Oat, Corn Leaf and English Grain aphids were recovered at several trapping locations) moving in response to maturing grain crops, a number of other vector species increased this week.  Potato aphids and Cotton/Melon aphids were numerous at several locations,  as were Buckthorn and Thistle aphids.  Soybean aphids, likewise, are starting to appear in low numbers at almost all trapping locations.

So, the more favorable weather for aphids we're experiencing may result in an associated increase in aphid numbers but so far, we're trending lower than last year.  Our typical peak aphid season is the next 2-3 weeks, lets hope our numbers stay low. 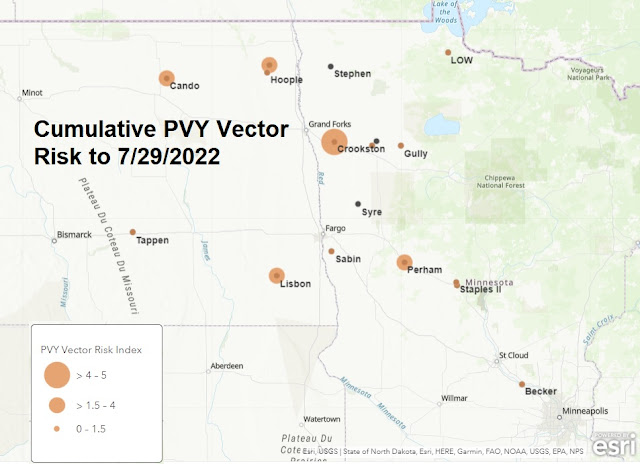 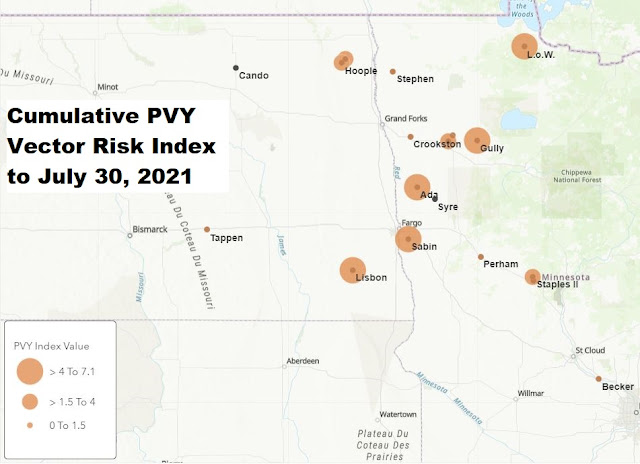