Reporting what will likely be the last report of the season, we received trap contents from two locations this week, neither of which contained any aphids.  Consequently, neither cumulative trap captures nor PVY Vector Risk Index values change this week...


As a seasonal wrap-up, we can say the PVY Vector Risk Index for 2016 was less than it was for almost all locations in 2015.  Significantly fewer green peach aphids were recovered (only 17 as opposed to the 143 GPA captured last year) and soybean aphid populations remained low throughout the season with the August dispersal event never really occurring (only 25 soybean aphids were recovered in 2016 as compared to 2189 soybean aphids in 2015!).  Most of the aphid vectors recovered in traps in 2016 were only moderately efficient vectors compared to green peach aphids as well, keeping the PVY Vector Risk Index numbers low through the summer.

Here's wishing you all good numbers in the winter grow outs!

The PVY Vector Risk Index Not all species of aphid are equally efficient at transmitting PVY, some are better than others (green peach being the most efficient vector of PVY).  So, the total number of aphids in a trap don't necessarily reflect just how much vector pressure there is at that location. The PVY Vector Risk Index compares aphid numbers, incorporating their relative vector efficiency compared to the Queen of PVY vectors (green peach aphid!).  Using averaged reference comparisons from the literature, we multiply the number of each aphid species captured by it's efficiency compared to Green Peach Aphid to more accurately depict risk posed by the species being trapped.  We then sum the totals.  The PVY-VRI values are presented on the tables below but also on maps comparing current cumulative risk to the total risk from the sample sites of last year (to compare with your local winter grow out results).  Click on the map for full sized image. 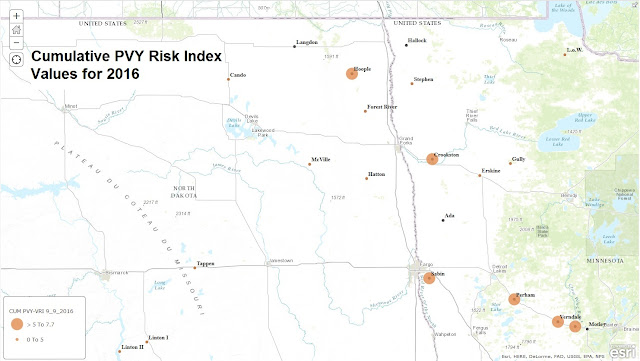 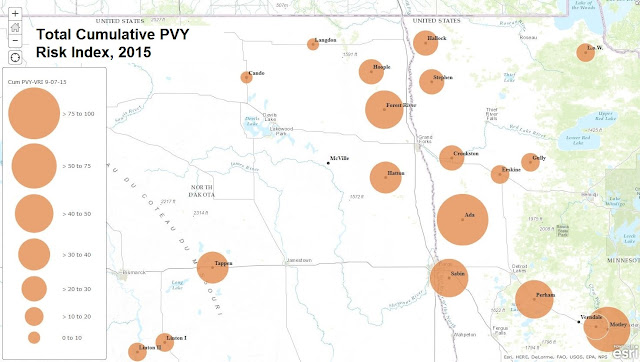 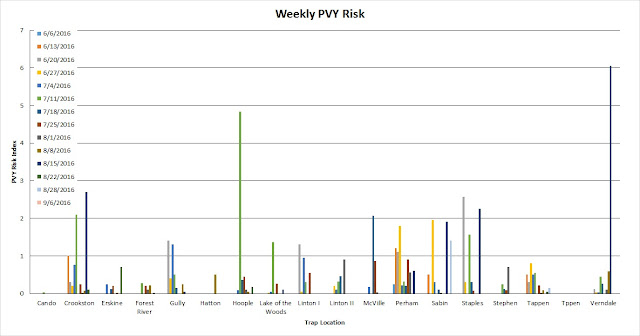