The aphid numbers decreased quite a bit this week - perhaps aphids don't like wood smoke!  The weather definitely had some effects on certain locations - apparently the Perham trap was blown over by powerful in-line winds - but our cooperators there got it set back up again.

Unfortunately, the decrease in aphids was all in non PVY vectoring species (darn it!); the number of aphids that can vector PVY remain basically the same as last week.  There were, however, some small changes in what species were recovered.

English Grain aphids made up the vast majority of the vectors captured in suction traps.  Their continued presence probably reflects different planting dates for small grains this year.  There were slightly fewer Soybean aphids but they were recovered at several locations. Damson-hop and Cannabis aphids were both found in a couple of locations and Corn Leaf aphids are continuing to move as well.

The days are getting shorter but this is also the time of year when we typically have the greatest movement of aphid vectors and the greatest increase in risk of PVY transmission.  The graph below was calculated from our 12 years of Aphid Alert Trap data - it shows the average number of vectors recovered per trap by ISO-8601 week (a way of standardizing week numbers across all years)..

Continued scouting is recommended, and use of crop oils and insecticides which stop feeding/probing may also prove necessary.  Remember, as long as there's green plant material, aphids will land and probe plants.  This means PVY can be vectored.  With the drought conditions and temperatures in several seed growing locations, care should be taken with oils to monitor for phytotoxicity.

We will keep counting.  As always, keep on scouting! 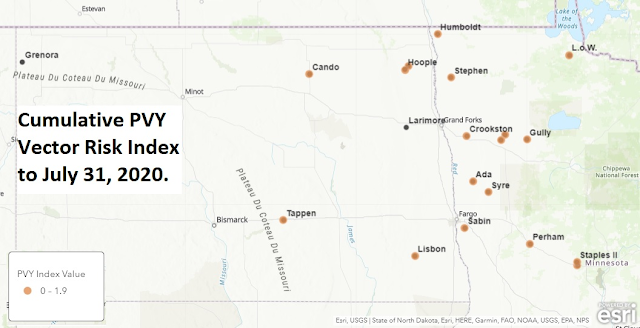