Aphid numbers took an even bigger jump this week with the vector numbers and the PVY Vector Risk Index tripling over last week.  Several locations had high counts which elevated PVY Vector Risk Index numbers accordingly. There were a number of efficient vectors captured at most locations, including Green Peach Aphids being recovered from both the Crookston and Hoople traps.  Soybean aphids also showed up at a number of locations, sometimes in very large numbers.  The Sabin trap had a combined 2 weeks of capture and recovered over 150 vectors, approximately half of which were soybean aphids.  Several other locations had captures that were high compared to what we've been seeing so far.
Our vector capture and risk index values are still lower than they were at this time last year.  But a large jump like this one over one week does signal we're not out of the woods for aphids yet.  Unfortunately, many of the vector species recovered this week were non-colonizing species.  So they'll move into a field, probing plants to test if they're suitable hosts, and finding potatoes not to be preferred food, move on to the next plant without leaving a daughter behind.  This means there'll be no tiny aphids on the leaves and little other sign of their presence on the plant.  So these non-colonizing species might not show up in your scouting.  That's not to say scouting isn't necessary, with the new-found presence of Green Peach and Potato Aphids in the area (which will colonize potatoes), scouting is still important.  If you're in an area with heavy counts and the situation persists next week, it might be a good to consider vine kill if you haven't already.
Hope the season is progressing well, check out the weekly trap catches below.
If you have a field where Colorado Potato Beetle aren’t being controlled by insecticides, please let us know.  We’d like to get samples of that population to test for insecticide resistance.  Contact Ian MacRae at 218-280-9887.
As always, keep on scouting!
Scouting for aphids in potatoes:
- Select leaves from the lower to mid canopy. Start at the edge of the field.
- Lower, older leaves will have more established colonies and aphids prefer the balance of nutrients found here; aphids are rarely found on leaves in the upper canopy.
- Avoid leaves on the ground or in contact with the soil.
- In seed potatoes there is only a threshold for PLRV (10 aphids/100 leaves), reactive application of insecticides an effective control for PVY.
- The use of feeding suppressing insecticides, such as pymetrozine (Fulfill®) or flonicamid (Beleaf®) and refined crop oils, such as Aphoil and JMS Stylet Oil, at or prior to field colonization by aphids may reduce the transmission of PVY within fields. Some other insecticides, such as clothianidin (Belay®), imidacloprid (Admire Pro® or Provado®), and spirotetramat (Movento®), have also been demonstrated to reduce the transmission of PVY.
- In table stock potatoes, a treatment threshold of 30 aphids /100 leaves should deter yield loss due to aphid feeding.
The PVY Risk Index Index
Not all species of aphid are equally efficient at transmitting PVY, some are better than others (green peach being the most efficient vector of PVY).  So, the total number of aphids in a trap don't necessarily reflect just how much vector pressure there is at that location.  The PVY Vector Risk Index compares aphid numbers, incorporating their relative vector efficiency compared to the Queen of PVY vectors (green peach aphid!).  Using averaged reference comparisons from the literature, we multiply the number of each aphid species captured by its efficiency compared to Green Peach Aphid to more accurately depict risk posed by the species being trapped.  We then sum the totals.  The PVY-VRI values are presented on the tables below but also on maps comparing current cumulative risk to the total risk from the sample sites of last year (to compare with your local winter grow out results).
Click on any image below for full-scale version.
Cumulative PVY Vector Risk Index to August 14, 2020. 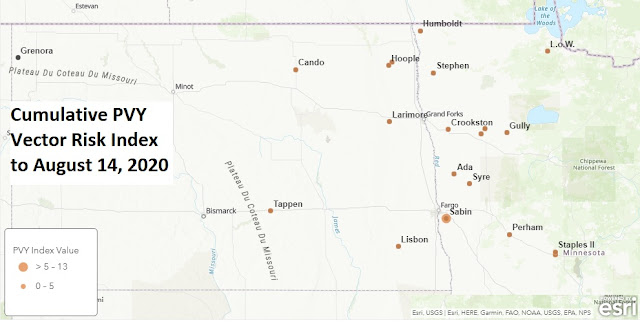 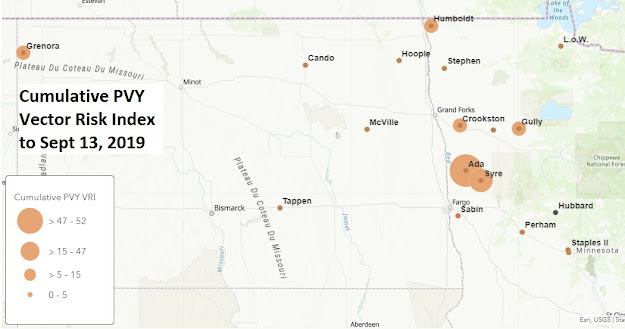