It's been another big week for aphids with 200 plus aphids being recovered in the traps - of course, almost 100 of those came from one trap (must have been a busy week for aphids in Ada, MN!).  Lots of cereal aphids and a few Green Peach Aphids again this week, and a real mix of species at several locations...

The trap at Ada, MN recovered almost 100 aphids this week, more than half of which were English Grain Aphid (this doubled the PVY Vector Risk Index values for Ada).  Cereal fields in the region have turned and are coming up on harvest, explaining the movement of cereal aphids.  Never-the-less, 58 English Grain aphids in one week was a big capture!  Other than that, Cotton/Melon and Thistle Aphids were captured at several locations.  Soybean aphids have also been increasing (but are still at very low numbers) at a number of locations.  Green Peach aphids were recovered at 1 location this week..

The PVY Vector Risk Index has doubled again this week and is on track with last year's.  Seems 2019 is quickly making up for a low start.

If potatoes still have green leaves, there can still be transmission of PVY.  Aphid dispersal events are continuing and scouting and oil applications are again strongly recommended! 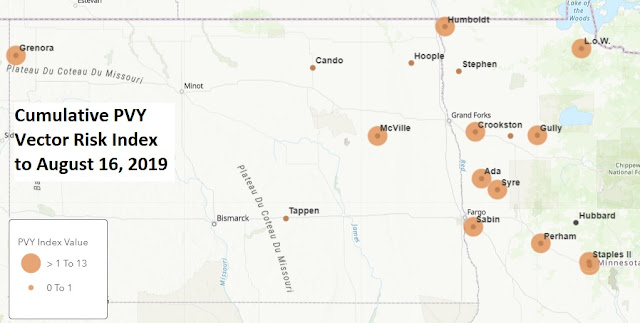