The numbers of all vector species but Buckthorn aphids decreased this week, as did the number of non-vector  species.  The lower number of vectors resulted in only a small increase in the PVY Vector Risk Index.

Our aphid population dynamics are very different from last year.  In 2020, a late season increase in vector numbers drove the PVY Risk higher.  It seems this year we are seeing an early decrease in vector numbers.  Compare the graphs below.  The first is the 12 regional year average weekly vector capture.  The second is the regional weekly vector capture to this point in 2021.  It remains to be seen if the pattern continues, but the high temperatures and drought this season may have driven both plant host and aphid populations along faster than in previous years.  Just a guess at this point...

Harvest is coming but the later varieties in areas that caught some moisture may still have a lot of green out there.  And that's just the color being sought by any vector still flying out there.

If It's Green, Then By Aphids It Can Be Seen! 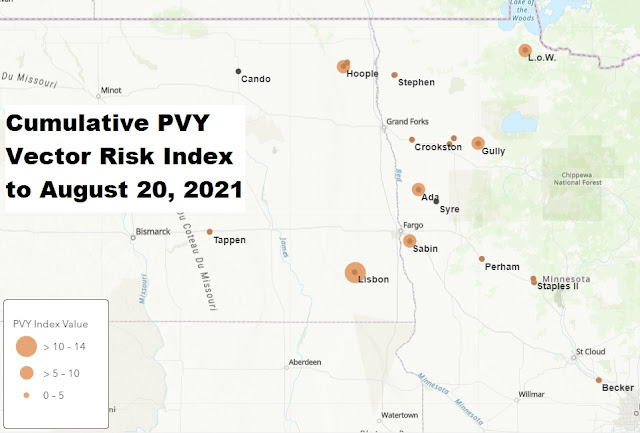