Aphid numbers were down for the second week in a row.  Traps last week recovered approximately 120 fewer aphids across the region as compared to the previous week.  The majority of this decline was in non-vector and small grain aphid species.

Only about 1/3 the number of English Grain aphids were recovered in traps in the past week, which is reflective of the amount of grain harvested over the past week or two.  Conversely, Corn Leaf aphids became the most numerous vector species captured this trapping period.  Again, perhaps reflective of the maturing corn in the region.

The changing status of crop hosts is starting to be reflected in different aphid species being recovered in the suction traps.  Sunflower and Thistle aphids were present in several locations last week.  And both Soybean and Buckthorn aphid numbers ticked up last week as well.

Soybeans in many locations are becoming increasingly drought stressed but we have yet to encounter the low night temperatures which are linked to Soybean aphids returning to buckthorn.  Their increase last week may be more influenced by the typical late July / early August dispersal event we usually see. 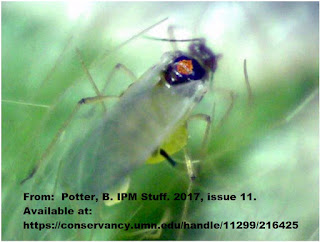 Aptly coined the SDE (Sturgis Dispersal Event) by Bruce Potter, our IPM Specialist at the Southwest Research & Outreach Center in Lamberton, this dispersal event seems to historically co-occur with the Sturgis Motorcycle Rally (which starts Aug 06 this year). Bruce first developed this hypothesis in response to some surprising photomicrographs he was able to obtain and share a few years back.  The orange and black coloring, strangely emblematic, on that particular Soybean aphid's thorax is certainly atypical for the species...  😉

As mentioned last week, much of the peak aphid flight in Minnesota and North Dakota seem to occur in August.  So we may yet have a lot of aphids moving between fields.  As long as there's green plant material, aphids will probe and PVY can be transmitted.  Most of our PVY is transmitted later in the season, so continue appropriate disease management tactics. 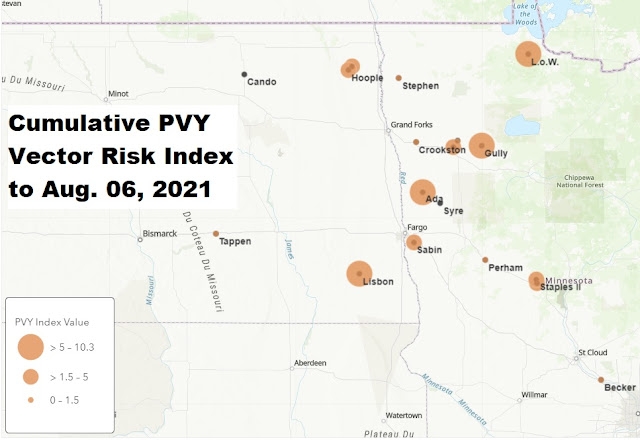