The numbers of aphid captures per trap continues to decrease this week, but vector numbers overall remained similar to last week.  There was only a slight increase in the PVY Vector Risk Index, putting us well behind last year at this time.  In 2020, we were recovering large numbers of late-season aphids that vector PVY and Vector Risk Index numbers at Aug 28 last year were roughly twice what they are now.  The high temperatures early in the summer likely accelerated the development, and subsequent decrease in host quality of other aphid plant hosts.  This stimulated an earlier dispersal of aphids, including those that vector PVY.  However, those earlier moving populations means there are fewer vectors flying now, we already seem to be past peak vector numbers.

There were still numbers of certain aphid species moving.  Soybean aphids were recovered from several trap locations and there are still Corn Leaf aphids being recovered in many locations.  Non-vectoring species of aphids ticked up a small amount this week.

The high temperatures and lack of precipitation have meant that in some locations tuber set and size are less than desired.  As noted, while numbers are decreasing, there are still aphids present that can vector PVY.  If delaying vine kill to allow more time for bulking, keep aware of aphid numbers. 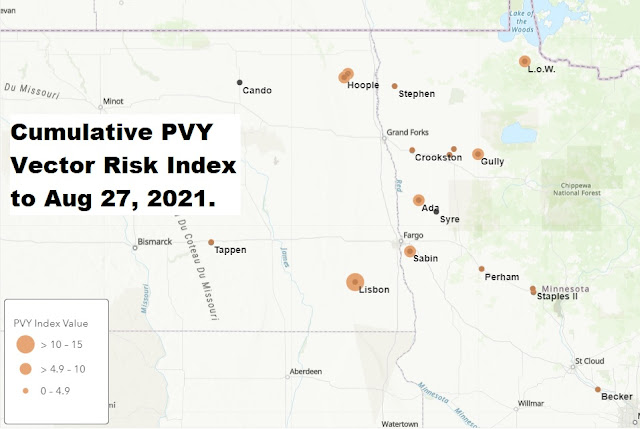