Welcome to the Aphid Alert update for the week ending July 07.  Twelve of our 19 sites are now reporting and we expect the remaining 7 to be online by next week.

There were some aphids flying this week, but a lot of them were non-vector species.  Overall, vector catch was relatively low but we did recover one Green Peach Aphid from Humboldt, MN, which also had several corn leaf aphids in their trap. The Crookston trap had the most diverse catch this week, while there was only one of each species, that trap captured soybean aphid, small grain aphids (English grain, Corn Leaf and Bird-Cherry oat aphids), a potato aphid, a turnip aphid and a Cotton/Melon aphid rounded out the vector count but they were all kept company by 9 non-vector aphids from 4 different species.  While not the most numerous trap this summer (last week Gully had a total 21 aphids and was topped by the Ada trap which captured 43 aphids) it did take a while to ID everything in that jar!

To this point, the Vector Risk Index remains low, but with the increasing temperatures we can expect more activity in the coming weeks.  So keep scouting... 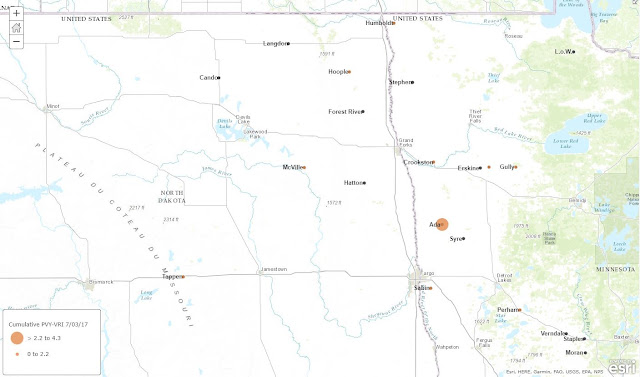